The Municipality of Halandri (Dimos Chalandriou) is one of the biggest in the metropolitan Athens area (Greece). It is situated in the north-eastern part of Attica and its population is approximately 74.000 inhabitants. Home to numerous small business enterprises ranging from restaurants to all day café bistros, Halandri is known for its bustling commercial center. It is also known as one of the northern suburbs crossed by the Kifissos river, the main river of Athens, which creates idyllic countryside views. This mix of urban and rural environments makes the Municipality one of the most desired places to live in Athens, with increased real estate value. The profile of an average citizen is characterised by an increased educational level and social responsibility. 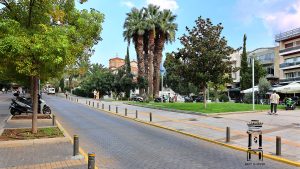 Being primarily an urban area, Halandri is not related to agricultural and primary food production. Food waste is produced mainly by its citizens as well as by the numerous restaurants and food stores (mainly bakeries, groceries, meat and fish shops) scattered throughout the municipality. Food waste is also produced by the public nurseries which are managed by the Municipality. The kitchens of the public nurseries provide food for the infants but also cooked food for approximately 70 people in need on a daily basis. It is unclear whether food waste is produced by the “social grocery”, which purchases or collects food from various donors and supports via its social kitchen and grocery shop approximately 1200 families in need.

The Municipal Solid Waste (MSW) Management System of Halandri is based on the decentralised waste management concept with emphasis on source separation. Halandri has a proven record of food waste valorization, as demonstrated by the results of Waste4Think HORIZON 2020 project. The project involved citizens that properly sort and dispose their food waste. In addition, the school of Chemical Engineering of the National Technical University of Athens developed and demonstrated a technology to produce biogas, compost and other products from the collected waste fraction.

At this stage, separate collection of food waste in special brown bins is being expanded, aiming to cover soon the whole Municipality. The collected food waste is transferred to a composting facility that covers the whole Athens Metropolitan area and is located 25 km from Halandri. Home composting is also supported by the Municipality in the effort to further divert biowaste from the central management system.

The main interest of Halandri in joining FOODRUS as a follower city is to limit food loss and waste by (a) monitoring the current situation, identifying the relevant hotspots and by (b) adopting some of the solutions and best practices developed by FOODRUS,  based on a circular economy approach and considering the specific characteristics of the region.

We use cookies on our website to give you the most relevant experience by remembering your preferences and repeat visits. By clicking “Accept”, you consent to the use of ALL the cookies.
Cookie settingsACCEPT
Manage consent

This website uses cookies to improve your experience while you navigate through the website. Out of these, the cookies that are categorized as necessary are stored on your browser as they are essential for the working of basic functionalities of the website. We also use third-party cookies that help us analyze and understand how you use this website. These cookies will be stored in your browser only with your consent. You also have the option to opt-out of these cookies. But opting out of some of these cookies may affect your browsing experience.
Necessary Always Enabled

Performance cookies are used to understand and analyze the key performance indexes of the website which helps in delivering a better user experience for the visitors.

Analytical cookies are used to understand how visitors interact with the website. These cookies help provide information on metrics the number of visitors, bounce rate, traffic source, etc.

Advertisement cookies are used to provide visitors with relevant ads and marketing campaigns. These cookies track visitors across websites and collect information to provide customized ads.

Other uncategorized cookies are those that are being analyzed and have not been classified into a category as yet.